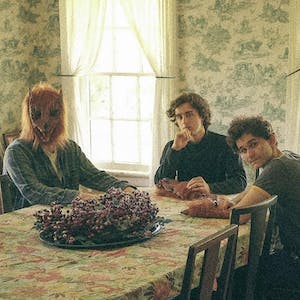 iCal
Google
Brazen Youth with Will Orchard and Reggie Pearl

The Brazen Youth - Nicholas Lussier and Charles Dahlke formed the Brazen Youth within the otherworldly vacuum of the 300-year-old Ashlawn Farm, located in Lyme, Connecticut. Timeless and freeing, Ashlawn served as a perfect birthplace of the Brazen Youth’s 2016 debut, The Ever Dying Bristlecone Man. A heavily conceptual record, Ever Dying is a world with endless nooks in which you can lose yourself, containing meticulous threads of layered tracks and arrangements that shift within songs like tectonic plates, all within an organic and atmospheric gloss of emotionally riveting, lyric-driven songs. Upon adding Micah Rubin to the band’s lineup in 2017, the Brazen Youth emerged with a wild-spirited presence into the East Coast scene, soon gaining an empowered and fresh fan base. The Brazen Youth is currently touring the U.S. in support of their latest record, “Primitive Initiative.”

Will Orchard - Will Orchard, a native of Rhode Island, began quietly releasing music in 2015 under the name LittleBoyBigHeadOnBike. Through a cathartic and carefree process, he steadily churned out hundreds of home recorded songs compiled into literally one-hundred releases on bandcamp, often drawing from whimsy and childlike tales in his lyricism. During this time, he began to take his songs around the US in a do-it-yourself fashion, gradually accumulating a small, passionate following. With releases like God Damn Wonderland and Big Blue Butterflies he delivered colorful, unpredictable collages, complimented by the hundreds of homespun arrangements decorating his constant output of songs. He is currently on the verge of releasing his transformative first record under the name Will Orchard, to be expected in early 2020.