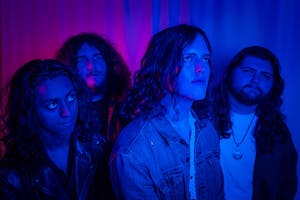 Consisting of four friends from the Washington D.C area, Bluewreck started out just like any other rock band would. By getting together in a hot basement and playing, revamping, and making some of their favorite songs even heavier. They all felt a natural chemistry between the four of them, and soon afterwards started playing out in the Washington D.C area. In 2017, they began writing their, and eventually recording what would become their first EP, which was released in March of 2018. Even during this process, they continued writing for what would become their first full length album. Bluewreck's first full length album, Out Of Control, was released on all platforms in August of 2018. Following 9 months of shows and promotion, Bluewreck released a single, titled Coming Down in March of 2019. Following this release, they were added as direct support for People's Blues Of Richmond, and have since opened up for King Buffalo, Paris_Monster, and Jessy Wilson. Bluewreck is hitting the road consistently in 2020, and aims to provide some freaky voodoo, and make some sonic witchcraft along the way.